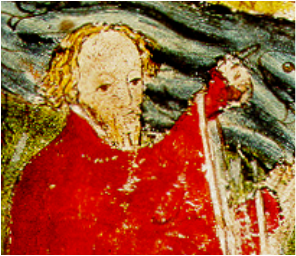 The work of the anonymous late fourteenth-century writer known today as the Gawain-poet or the Pearl-poet after his two greatest works (the Arthurian tale Sir Gawain and the Green Knight and the poetic dream-vision Pearl) proves that high artistic achievement in late medieval England was not confined merely to the cities, monasteries, and great courts.  The Gawain-poet writes in a regional variant of Middle English, the Northwest Midlands dialect, and many scholars agree that his language can be specified further to the counties of Cheshire or Staffordshire.  Other hints from his poetic works suggest that he was well-read, familiar with British historical traditions, romances, homilies, and other didactic theological writings, and the Vulgate Bible.  He may quite possibly have been a chaplain at the court of a nobleman in western or northwestern England.   Scholarly attempts to positively identify him with one or another particular individual have generally failed to convince.

The works of the Gawain-poet are contained in a single extant manuscript, British Library MS Cotton Nero A. x., and consist of four poems (in order): Pearl, Cleanness, Patience, and Sir Gawain and the Green Knight.  The opening poem, Pearl, is a dream-vision in which a bereft man, known throughout as the "Jeweler," encounters in a vision the soul of a girl (many scholars presume her to be the Jeweler's daughter, but the text is ultimately undecidable on this point), who, after chiding him for his excessive grieving, reveals to him a vision `(or gostly drem) of the New Jerusalem.  The second poem in the manuscript, Cleanness (known in earlier scholarship as Purity) is a didactic exploration of the contrasting ideas of purity and pollution, of moral health and moral sickness; it draws heavily on examples from the Bible.  Patience, the following poem, takes a more homiletic approach, meditating on faith in divine Providence in the face of adversity and focusing especially on the Biblical story of Jonah and the Whale.  The last poem of the manuscript, Sir Gawain and the Green Knight is acknowledged by many scholars and readers as being among the very finest examples of Arthurian romance.  It tells of the intrusion of the uncanny Green Knight into King Arthur's Christmas court with a challenge: to chop off his head with the understanding that, in a year's time, the blow will be returned.  Sir Gawain rises to the task and is dismayed when the decapitated Green Knight picks up his head and leaves the court, in full expectation of requiting the blow upon Gawain the following year.  Gawain's adventures in the ensuing year, including his surprising ultimate rendez-vous with the Green Knight, constitute a moving, penetrating, and unnerving examination of the latent contradictions between chivalric values and Christian virtue.

All of the poems of the Gawain-poet are rendered in clever and intricate, often virtuosic alliterative Middle English verse.  The poet evinces a full awareness of the slipperiness of language, of the ability of words to mean different things in different contexts and to different people.  This awareness of semantic possibility enables the poet to animate several tensions across the four works: abstract theory vs. concrete action, sinfulness vs. moral purity, religious doctrine vs. human fallibility, as well as the perspectival differences between temporality and eternity.  These poems offer no easy solutions to any of these sets of dichotomies, instead holding them in tandem in a productive creative tension.

These poems can also shock.  The sober and mature authority of the Maid's speech in Pearl impresses itself upon many readers, as does the frank celebration of sex that the poet puts into the mouth of God in Cleanness.   Similarly surprising -- haunting even -- is the description of the Green Knight in the final poem; likewise, Gawain's coy luf-talkyng in Castle Hautdesert both reverses generic expectations and injects a an unexpected and uneasy humor into an already tense narrative.  The crisp tautness of the Gawain-poet's verse, as well as his incomparable sense of timing and of the power of juxtaposing the homely and the uncanny assure his place as a master of Middle English alliterative line and, as the narrative inventiveness of his poems amply show, a worthy rival of his contemporary Chaucer in the telling of a tale.