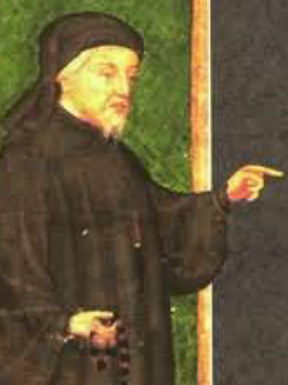 Portrait of Chaucer by the poet Hoccleve.
For my most recent Chaucer syllabus (ENG 352), click here.

For a survey of writers who influenced Chaucer, click here.

Because of his prominent position in society, we actually know more material details about the life of Geoffrey Chaucer, who was born around 1340, than we do about the life of William Shakespeare, who was born over two hundred years later.   The son of a prosperous vintner with ties to the English royal court (and the more distant descendant, presumably, of shoemakers, judging by his surname), Chaucer was in many ways a social anomaly, educated but not an ecclesiastic, rubbing elbows with English royals but of solidly middle-class origin.

All his self-presentations in his own poetry are similarly enigmatic.  Famously, in the Prologue of The Tale of Sir Thopas, he describes himself as small, unassuming, and, well, rather nondescript, even if there was also something vaguely odd (elvysshe) about him.

Whatever his personal affect, Chaucer's public career is well-documented.  He began working, probably around age twelve, as a page in the court of Lionel of Antwerp, the son of King Edward III, a position procured for him by his father.  Over the next ten years, he worked his way up the ladder of service; he had proven himself so valuable to the court that, when he was captured in battle in France in 1359 (the Hundred Years War was still going strong), the king agreed to pay a £16 ransom (a handsome sum in those days).  A few years later, the still young Geoffrey was sent to Milan as part of a diplomatic party to  broker a loan with one of the Italian banking families.  It was during this first trip to Italy in 1367, while attending a wedding, that Chaucer quite possibly met the great Italian poet and humanist Francesco Petrarca (Petrarch).   Also on this trip, or on his two subsequent Italian missions, Chaucer was exposed to Dante's Divine Comedy and to some of the works of Giovanni Boccaccio.  Chaucer's engagement with the work of these Italian poets shows up in myriad ways throughout his works, lending him a depth and sophistication that distinguishes him from contemporary English writers.

After his diplomatic stints in Italy had concluded, Chaucer returned to England and took up the first of a series of fairly lucrative administrative posts as Controller of Customs for the port of London.  It was in this period that he began writing in earnest, first translating old chestnuts like La Roman de la Rose and Boethius' Consolation of Philosophy into Middle English verse, and then composing his own original poems, dream-visions influenced by French poets (especially Guillaume de Machaut) in the courtly love tradition and by the Italian poets mentioned above.  His earliest truly original poem, The Book of the Duchess (ca. 1373), is a highly sophisticated and self-conscious dream-vision ostensibly offering consolation to his patron John of Gaunt ("the Black Knight") on the death of his wife, Blanche of Lancaster.

Over the next ten years or so, Chaucer explored the form of the dream-vision further in The Hous of Fame and The Parlement of Foules.  Another dream-vision poem from this period, The Legend of Good Women, ratifies the poet's commitment to problematizing facile medieval misogynies.  Chaucer's literary career really peaked with the composition of his romance epic Troilus and Criseyde (ca. 1385).  This tale of two star-crossed lovers, set amid the final days of the Trojan War, is tender, stark, tragic, funny, and at all turns replete with canny psychological insights and a keen sense of the tensions between individual desires and the larger demands of History.

A word-cloud of English terms first attested in Chaucer's works
Had Chaucer died immediately after finishing Troilus and Criseyde, he would surely still count as the major English poet of the late Middle Ages, but around 1386, he began work on what would become his most abiding masterpiece, The Canterbury Tales.  The pretext of the Tales, as set out in The General Prologue, is deceptively simple: twenty-nine pilgrims from a wide array of social backgrounds  set out from London to Canterbury, agreeing that along the way each will tell four tales -- two on the way there, and to on the way back.  Even though Chaucer in the end only had time to compose twenty-four tales, a mere fraction of the projected total, the tales constitute a remarkable range of genres, tones, and attitudes.  Just as the Canterbury pilgrims represent a wide array of social classes, so do the tales embody with breadth and depth a multiplicity of worldviews.  From the stately (well, mostly) Knight's Tale of courtly love that opens the collection to the shockingly bawdy humor of The Miller's Tale or The Summoner's Tale, from the outrageous charm of The Wife of Bath's Prologue to the chilling cynicism of The Pardoner's Prologue and Tale, the stories of Canterbury pilgrims reveal over and over again Chaucer's deep insights about human nature -- its strengths and frailties and blind spots -- and especially about how the stories we tell reveal as much about the teller as they do about their subjects.

As a whole, the collection also constitutes what Peter Travis has called a "Menippean satire": the complex interactions between the pilgrims and the thematic resonances and dissonances between their tales allow Chaucer to kaleidoscopically combine social satire with intellectual critique.  The result is a text that richly rewards rereading and continues to win over audiences even today.

If nothing else, The Canterbury Tales reveal that Chaucer perceived the very notion of identity as a tricky and potentially dangerous business.  This insight may have served him well during the last two turbulent decades of the fourteenth century.  The worldly Chaucer had been close to the young King Richard II in the 1380s -- perhaps in the king's inner circle -- but he seems to have distanced himself from the royal court after a baronial rebellion in 1387.  Indeed, the beginning of his work on The Canterbury Tales coincides with his purchasing land in Kent, perhaps to get out of London and lay low.  Some readers have associated Chaucer's studied ambiguity and his ironizing of, well, practically everything, with a calculated, even cynical, apoliticism.  But to focus only on this is also to ignore the deep and largely sympathetic perceptions of human beings, with all their likable weaknesses and self-deluding follies, that infuse his work.  Although Chaucer died (or perhaps, as Terry Jones speculates, was murdered) in 1400, leaving The Canterbury Tales unfinished, the large fragments that survive at the very least bear witness to the pulse and foment of their age, and, to no small extent, to the follies of our own as well.

The Canterbury Pilgrims as imagined by William Blake