Geoffrey of Monmouth's The History of the Kings of Britain
(Broadview Press, 2008) 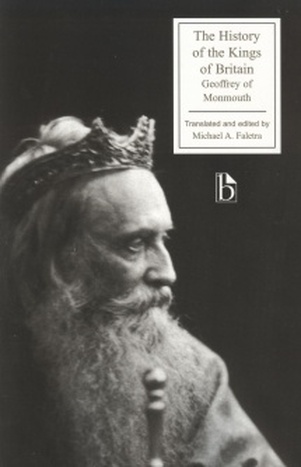 "Faletra has created a superb addition to Broadview's increasingly strong catalog of medieval texts for the classroom. This volume will likely be the version of Geoffrey's "humble style" for a new generation of students, and it has much to offer them."
---- Matthew Fisher,  Speculum

"Geoffrey of Monmouth's Historia—'food and drink of poets' and provocative goad to historians—is wonderfully contextualized in this fine new translation by Michael A. Faletra. It immediately assumes canonical power as a crucial teaching text."
---- Bonnie Wheeler, Southern Methodist University

"This new translation of Geoffrey of Monmouth's seminal history will be of great value to teachers of Arthurian literature. Michael A. Faletra accompanies his smooth, modern translation with an intelligent selection of supporting primary material from the Latin and Welsh traditions. The decision to include a complete translation of Geoffrey's Life of Merlin makes the book particularly attractive. The useful introduction positions Geoffrey's work in its historical, cultural, and critical context. A most welcome addition to Broadview's increasingly impressive list of texts."
---- Siân Echard, University of British Columbia

“This book is a treasure-trove for teachers and students of the King Arthur legend. A fresh, up-to-date translation of Geoffrey’s masterpiece is nice to have, but better yet is a good version of the Vita Merlini (harder to find) and Faletra’s choice of excerpts from Gildas, the Historia Brittonum, some Welsh Arthur and Merlin verses, and early comments on Geoffrey’s enterprise. For anyone who wants to teach the origins of the Arthur story, it is immensely useful to have all this between two covers.”
--- Judith Shoaf, University of Florida

"Michael A. Faletra has provided us with a lively new translation of the most important foundational text in the Arthurian tradition, Geoffrey of Monmouth's Historia Regum Britanniae. Faletra's work will be of service to the scholar, the teacher, and the general reader. The book's four appendices contain fresh translations by Faletra of the major sources and analogues to Geoffrey's history, including Geoffrey's own Life of Merlin. Faletra's up-to-date introduction, notes, and bibliography enable the reader to follow recent scholarly discussion and debate surrounding one of the most influential, and controversial authors of the Middle Ages."
---- Michael J. Curley, University of Puget Sound

Geoffrey of Monmouth’s The History of the Kings of Britain (Historia Regum Britanniae) has played an important role in both my scholarship and teaching.  Geoffrey’s work is fascinating for the ways in which it explores and problematizes the shady lines between fiction and history, truth and deception, and earnestness and dissimulation.  Geoffrey’s largely fabricated account of the history of (Celtic) Britain prior to the settlement of the Anglo-Saxons proved enormously influential for readers throughout the Middle Ages and beyond, supplying the basic template of the insular past that later writers such as Chaucer, Malory, Spenser, and Shakespeare (via Holinshed) would draw upon.  The text also develops one of the most influential medieval colonialist tropes about the Welsh, claiming that the Welsh are the barbaric descendants of the ancient Britons, now stripped of their right to sovereignty.  This troubling trope gave rise to questions I have addressed throughout my scholarship and in this edition and translation of the work as a whole.

My interest in creating a new translation and edition of The History of the Kings of Britain grew out of years teaching the text in the only edition available at the time (Lewis Thorpe, Penguin, 1966).  As the students and I closely studied the text, I grew dissatisfied with the translation and began my own, hoping to build on a better understanding of the text’s medieval manuscript traditions while providing thorough annotations, relating Geoffrey’s text to contemporary twelfth-century political culture as well as to its source materials.  I also wanted to provide students of Arthurian literature, and of medieval literature in general, with a readable and affordable text that supplied ample appendices of contextual readings.  Broadview’s Literary Texts and Contexts has been an ideal home for this project, as it encourages editions that provide a range of background materials.  I was thus able to supplement my translation of Geoffrey’s History with translations of Welsh texts relating to King Arthur and Merlin, with all the relevant selections from Geoffrey’s major historical sources, and with a new translation of the entirety of Geoffrey’s only other extant work, The Life of Merlin.

To purchase a copy of The History of the Kings of Britain, go either to the Broadview Press webpage, or to Amazon.com's page.