Wales and the Medieval Colonial Imagination:
The Matters of Britain in the Twelfth Century 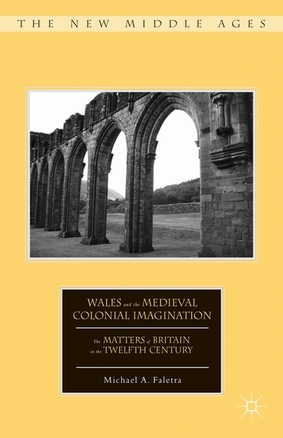 "Ambitious and interesting ... an eminently useful book."  — The Medieval Review

"In this crucial intervention in the burgeoning field of post-Conquest Insular studies, Faletra shows how central the Welsh periphery was to the political consciousness of twelfth-century England. Founding his analysis upon the radical disjuncture Geoffrey of Monmouth effected between the ancient British (the glorified neo-Trojan rulers of the first Insular imperium) and the twelfth-century Welsh (their descendants who have nonetheless degenerated into barbarous alterity), Faletra argues that authors as varied as John of Salisbury, Marie de France, Walter Map, Chrétien de Troyes, and Gerald of Wales turned to Wales and the Welsh as paradigms through which to negotiate anxieties of ethnic specificity, cultural hybridity, and temporal dominion."
--- David Rollo, University of Southern California

"Faletra has composed an ambitious and challenging account dedicated to the proposition that the complex representation of Wales in medieval literature should matter to everyone interested in the development of medieval European culture. Placing the work of Geoffrey of Monmouth at the heart of his narrative, Faletra traces the resonances of Geoffrey's work in a variety of French and Latin texts from the twelfth century, as well as considering the contact of Welsh literature with these other British and French traditions."
--- Simon Meecham-Jones, University of Cambridge

Matters of Britain: Wales and the Medieval Colonial Imagination, locates the origins of English colonial discourse in twelfth-century Norman territorial expansion into Wales, accounting as well for the strange ideological persistence of the historical subordination of Wales to England.  The “Matters of Britain” that are generated in the twelfth century and beyond by the Anglo-Norman need to come to terms with the Welsh and their claims on the past of the island of Britain (as descendants of the ancient Celtic Britons) proliferate throughout a range of texts in a variety of different genres, including histories and pseudo-histories, courtly miscellanies and treatises, Arthurian romances, Breton lais, and travel narratives.  I show that Geoffrey of Monmouth's Historia Regum Britanniae is of central importance to the development of these discourses, condensing and transmitting tropes of Welsh barbarity, peripherality, etc., to later writers.  Apart from the Historia Regum Britanniae, some of the other texts I focus on include Chrétien de Troyes’s Erec et Enide, Marie de France’s Yonec, Lanval, and Milun, John of Salisbury's Policraticus,  Gerald of Wales’s Topographia Hibernica, Itinerarium Kambriae, and Descriptio Kambriae, and Walter Map’s De Nugis Curialium.

Table of Contents
You can purchase Wales and the Medieval Colonial Imagination directly from the publisher, Palgrave Macmillan (click here), or from Powells.com (click here), or on Amazon.com.