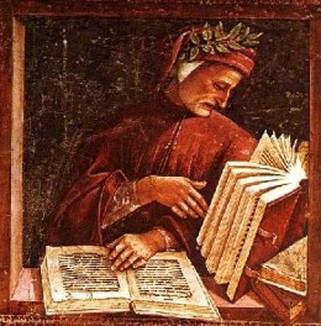 In this course we will study Dante Alighieri’s fourteenth-century masterpiece The Divine Comedy, seeking to understand this ambitious poem both on its own merits and as an index of the major literary, artistic, and intellectual currents of European culture during the High Middle Ages.  The Divine Comedy as a whole narrates Dante’s fictional journey through the afterlife, where he witnesses the eternal torments of the damned souls in Hell, the patient endurance of the restless Christian spirits in Purgatory, and the ineffable delights of the blessed in Paradise. As we follow Dante-pilgrim on his journey, we will look specifically at the poetic and narrative strategies that Dante-poet employs in thinking through the changing relationships between language and truth in the separate canticles of the poem, thinking about how an infernal poetics, for example, differs from a paradisiacal one.  In light of ongoing debates in Dante studies, we will also focus on the extent to which Dante’s poem enjoins readers to a process of conversion and on the ways in which Dante establishes his own poetic and moral authority as a counterweight to the corruptions of the fourteenth-century Church.

Readings will be from the English translation by Jean Hollander and Robert Hollander, with the Italian text of Dante’s poem on the facing page.