"Ego simili possum admiracione dicere quod in curia sum, et de curia loquor, et nescio, Deus scit, quid sit curia."
("In a like spirit of perplexity I may say that in the court I exist and of the court I speak, but what the court is, God knows, I know not.") 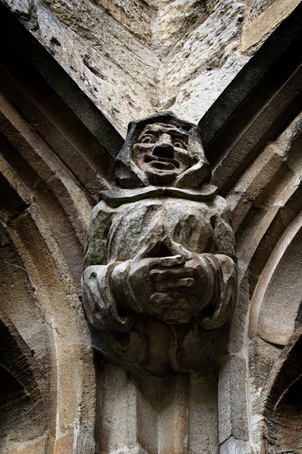 Master Walter Map, born in Herefordshire around 1130-1135, was surely one of the great smart alecks of British literature, the equal of such ironists as Geoffrey Chaucer, Jane Austen, and Jonathan Swift.   A functionary in the court of Henry II and later Archdeacon of Oxford, Map was best known for his supple wit and his talents as a raconteur.  Presumably at odd moments amidst all his official duties, he found the time to gather together, in an elegant Latin, a sprawling collection of various jokes, anecdotes, observations, and mini-romances known as the De Nugis Curialium (The Courtiers' Trifles), the title itself being a jab at John of Salisbury's very sober Policraticus, which was itself subtitled De Nugis Curialium.

Although at first glance the De Nugis Curialium may seem only loosely organized, in fact there are several thematic threads that persist and interweave throughout the whole work: anti-monasticism; friendship; an animus toward women and the Welsh; and a preoccupation with the undead, with Otherworldly brides, and with other supernatural phenomena.  His fifth and final book mainly provides brief histories and character sketches of recent British rulers.  Map juxtaposes his stories and anecdotes in ways that reveal his appreciation of Ovid's Metamorphoses, one tale transforming -- at times gracefully, at times grotesquely -- into the next.

Walter Map was until the mid-twentieth century also thought to be the author of the Vulgate Cycle, an early thirteenth-century cycle of Arthurian romances.  This attribution has now been discarded, but it is still of course possible that Map knew and retold Arthurian tales and may have contributed significantly to their oral diffusion in the second half of the twelfth century.

Map was also until recently thought to be of Welsh extraction, his surname happening also to be the Welsh word for "son."  This too seems unlikely, and the De Nugis Curialium seems genially hostile to the Welsh throughout, at least on the surface.  I discuss this curious dynamic at length in my monograph, Wales and the Medieval Colonial Imagination.

Walter Map died, probably in Oxford, around the year 1209.