The Itinerarium Kambrie of Gerald of Wales:
First Recension (1191) 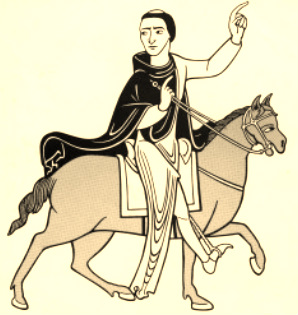 Before England turned its colonial eye to India or North America or even to Ireland, it had already established a discourse of colonization in Wales.  Beginning soon after the Conquest in 1066 C.E., Anglo-Norman barons made inroads into historically Welsh areas, their territorial ambitions accompanied by the work of various writers – historians, poets, theologians, and courtiers – who invented, adapted, and disseminated a pervasive series of colonialist tropes about Wales and the Welsh.  Presenting the Welsh as barbarous, immoral, and untrustworthy, their tropes proved vital to the development of later colonialist and imperialist modes of thinking about the Other. The works of Giraldus Cambrensis (1146-1223), also known as Gerald of Wales, represent a crucial intervention in the development of these discourses.  Gerald’s Itinerarium Kambrie (The Journey Through Wales), first composed in 1191, embodies all the contradictions of its cantankerous half-Welsh half-Norman author’s divided political and ethnic loyalties.  By both articulating and undercutting these tropes, Gerald provides a distinctive lens through which both historians and literary scholars may understand the early evolution of colonialist discourse.  By presenting this text in its original and hitherto unpublished and unexplored form, this project will provide for students and scholars of the humanities a richer understanding of the complexities of twelfth-century Wales and of the emergence of ethnic and national consciousness in the medieval period.

The Latin Itinerarium recounts Gerald’s travels throughout Wales in 1188.  The book is a remarkable source of historical information and misinformation, of keen anthropological observation and ethnic stereotyping, of pride and prejudice.  Along his road through Wales, Gerald’s Itinerarium repeatedly bears witness to the complexities and horrors of the colonial situation in twelfth-century Wales, recording atrocities committed by Normans and Welsh alike.  In this, the text stands as a key document for our understanding of the preconditions of national consciousness in Wales, for despite its occasional and apparently genuine admiration for the Welsh, the Itinerarium adumbrates English colonial discourses as they would emerge centuries later.
Regretfully, almost all scholars and general readers have been familiar with the Itinerarium only in its third and final version and have thus been without the several advantages of Gerald’s earliest text, a problem which my project will remedy.  Gerald’s earliest version of the Itinerarium allows us to identify many of the contradictions he encompassed, such as accusing the Welsh of habitual incest, yet boasting often of his close blood-ties to various Welsh princes, including especially the powerful Rhys ap Tewdur.  This important text also presents its author as a cleric whose idea of church reform had not yet become yoked to the issue of Welsh independence and whose consequent maneuvering and politicking between Norman and Welsh patrons offers a consistently compelling, if also tellingly ambivalent, presentation of medieval colonial identities.

My new edition and translation of the Itinerarium Kambrie reproduces and translates the earliest version of the text for the first time.  At present, both scholars and the general reading public have only had access to the Itinerarium through Lewis Thorpe’s 1978 Penguin translation, itself based on Dimock’s 1868 Latin edition, which presents only the text of the third recension, thus diluting much of the studied ambivalence that emerges in Gerald’s earliest version. The first recension, in contrast, has never been translated into English (or Welsh, for that matter), and its Latin text has never been independently edited, appearing only in fragmented form within the variorum of Dimock’s edition. The first version – unlike the latter two – has come down to us in two manuscripts that were certainly in Gerald’s possession, were produced at his scriptorium by his personal secretaries, and were almost certainly proofed and corrected by him, adding further authority to this version of the text.

By making this remarkable book available both in its original Latin form as well as in English, it is my hope to reinvigorate not only literary and historical scholarship on its compelling author, but discussions about the origins of English colonialism and the difficult birth of the Welsh nation as well.